The banning of Patrick Ross

A few years ago, I started moderating my comments. I did this because people would at times publish defamation here, and, as the blog owner, Canadian libel law holds me responsible for that content.

I also was allowing people to defame me in my own space.

I still do. The difference is, I only publish their comments when I'm ready. No more would some insult or calumny rest on my blog unanswered for hours at a time.

It's a strategy that worked well. Until recently.

A few days ago, Patrick Ross started leaving comments here. I published them. I had to offer rebuttal. My rebuttal was increasingly ignored. Eventually, for my own reasons, I stopped publishing Ross in one of my threads, and dropped a message there explaining why. 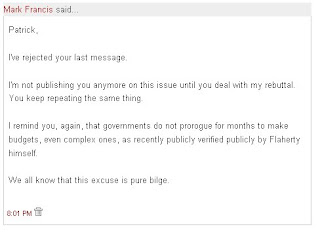 Between work, my kids, whom I financially support and, most days of the week, raise alone; and my political activities, which have had me quite busy for the past several weeks (CAPP), it takes effort for me to respond to people here. Frankly, if they are wasting my time, I am going to resent it.

It has become very clear Ross was commenting here to merely demonstrate that he could.

Ross and Canadian Cynic have a dispute, the history of which I am personally well aware of, but not involved in. I will not repeat it here. Still, due to my above mentioned commitments, I was not aware that CC had issued a request for progressives to stop publishing Ross. Those who continue to are subject to an embargo by CC.

Ross has been dropping comments around the progressive blogosphere more than usual lately. He made clear yesterday why: all of us who published him he is claiming to not honour CC's request. Ross has specifically named me as "rejecting" CC's request. This is out of line.

Ross never raised this issue with me, and I was not aware of it. My publishing of Ross' comments should not be construed by him as a lack of support for CC.

It is clear to me that Ross was occupying my valuable time only for the petty reason of defaming CC.

I will not allow myself to be used in this way.

Patrick Ross, you are banned from this blog for disrespect and misrepresentation. I know you are baiting me. I don't care.

I also support CC's call for a general embargo on Ross's expression.

If this sound wrong, it's not. CC, after all, is not preventing Ross from exercising his freedom of expression. Ross can publish all he wants on his blog. CC is not preventing any of us from doing the same. No, CC is just setting editorial restrictions within his own space. We are free to respond in any way we like. The blogosphere does not rise or fall based upon CC's choices and writings.


People need to be aware that in publishing a comment, either directly though moderation, or indirectly, through a open comment policy, that you are responsible for disseminating that person's ideas. This is both a legal and a moral responsibility. Though my comment policy arose out of legal issues, I am all too aware that allowing others to publish propaganda here means that I am disseminating that propaganda as well.

By coincidence, just a few hours ago, I read this passage in "Not a Conspiracy Theory" by Donald Gutstein (great book) pp 309:


"...progressives need a common enemy if they are to rally their diverse groupings to a common cause. Historically, the enemies of the left have been poverty, homelessness, inequality, poor health care, racism and sexism. The enemy of the right, in contrast, is the left. Progressives need to make the right -- the radical conservatives -- the enemy... they must engage the enemy, who they consider the source of most injustice."


If that sounds harsh, I'm sorry to say that it's not. We are under siege. For generations we have relied on Peace, Order and Good Government. We get the third in exchange for granting the other two.

Well, we used to have Good Government.We don't anymore.

Our Prime Minister is involved in a propaganda war against those he represents. He has locked the doors of Parliament for purely partisan reasons, and gives us lies to justify it.

There's a long list of Harper's active erosion of our democracy here.

Harper has many syncophants willing to perpetuate these lies. CC understands this better than most. He does not suffer fools, and calls them as he sees them. Mostly, he makes the right calls.

We progressives all too often make the mistake of thinking that we are engaged in some sort of reasoned dialog with people. Truth will prevail! Facts speak for themselves! Conservatives just need more facts, then they'll understand.

Sure, it happens that some come around. But far too many on the right are just ditto-head loyalists repeating lies and laying fog.

I have no cause to aid them in any way.

So I support Canadian Cynic.

The enemy is ruthless, and it's time that we were too. Especially now with our Parliament locked.

We should not be spending time arguing with the Patrick Ross' of this world when we need to be hammering on Parliament's doors.

It is going to get worse, people. It is.

Please watch this piece below, and understand that it is not a polemic. It is simply the truth.

As you watch it, remember that Harper, prior to re-entering politics, fought hard in our courts to remove restrictions on third party advertising during elections.

And stop giving a platform to those who would keep us on our knees.

And please, be afraid. Give yourself leave to be. You need to be.

Visit msnbc.com for Breaking News, World News, and News about the Economy

Not here, Over There!

Looking for me? This blog has been dead for quite a while. You can find my latest blog at https://korptopia.blogspot.ca/ My other social m...

Mark Richard Francis
Born in vibrant Quebec, then transplanted at a young age to the then-drab Greater Toronto Area (no crack-addled mayors back then), your epic hero endured his childhood of alienating urban sprawl and indifferent teachers (No, Mrs. whatever-your-name-was, I did not plagiarize that short story I submitted in Grade 12 English class! Bitch.) to emerge apparently average and mundane from a community college, which failed to teach him the value of avoiding run-on sentences. He then blew the next decade or so road-testing various women, jobs, beers, lawsuits and careers. After valiantly co-creating three children, he discovered they needed to eat, so he settled into a stable blue-collar existence. He now lives just north of Toronto, Ontario, with the latest -- and hopefully last -- love of his life, where he continues to hate cats. He is a Rush fanatic, a coffee lover (though not after 1 pm) and enjoys long walks on the beach between E. Coli outbreaks. He also writes... poorly, but with a determined obstinate stubborn determination. Oh, that's redundant and repetitive.